“Some of the most uncompromising, hot music to singe these ears in a long time.“–Fiddler Magazine 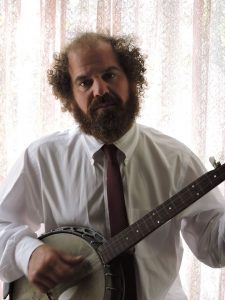 Headed by hirsute humorist, singer, yodeler, and player of the guitar, banjo, harmonica and kazoo JimBo Trout seeks to entertain one and all. He is known for his passionate and energetic approach to performance.  JimBo can be frequently spotted playing solo at  clubs, parties, farmer’s markets, children’s shows, as well as frequent duo shows with Steve and  gigs with the band. JimBo hosted the monthly Bluegrass Jam at the Atlas Cafe from 1998-2017 which for many years was the proving ground for all up-and-coming bluegrass pickers in the Bay Area. He also held a weekly gig at San Francisco’s old 3300 Club playing mostly old-time music from 1998-2001. JimBo is sometimes referred to as “the Victor Borge of bluegrass.”